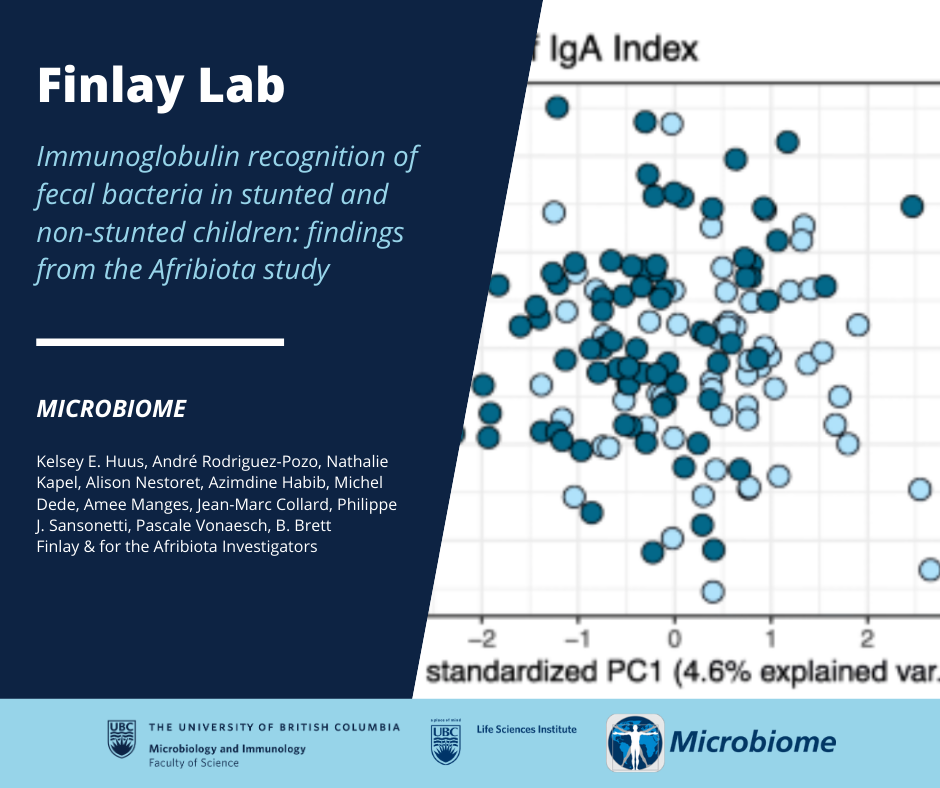 Child undernutrition is a global health issue that is associated with poor sanitation and an altered intestinal microbiota. Immunoglobulin (Ig) A mediates host-microbial homeostasis in the intestine, and acutely undernourished children have been shown to have altered IgA recognition of the fecal microbiota. We sought to determine whether chronic undernutrition (stunting) or intestinal inflammation were associated with antibody recognition of the microbiota using two geographically distinct populations from the Afribiota project. Fecal bacteria from 200 children between 2 and 5 years old in Antananarivo, Madagascar, and Bangui, Central African Republic (CAR), were sorted into IgA-positive (IgA+) and IgA-negative (IgA−) populations by flow cytometry and subsequently characterized by 16S rRNA gene sequencing to determine IgA-bacterial targeting. We additionally measured IgG+ fecal bacteria by flow cytometry in a subset of 75 children.

Stunted children (height-for-age z-score ≤ −2) had a greater proportion of IgA+ bacteria in the fecal microbiota compared to non-stunted controls. This trend was consistent in both countries, despite the higher overall IgA-targeting of the microbiota in Madagascar, but lost significance in each country individually. Two of the most highly IgA-recognized bacteria regardless of nutritional status were Campylobacter (in CAR) and Haemophilus (in both countries), both of which were previously shown to be more abundant in stunted children; however, there was no association between IgA-targeting of these bacteria and either stunting or inflammatory markers. IgG-bound intestinal bacteria were rare in both stunted and non-stunted children, similar to levels observed in healthy populations.

Undernourished children carry a high load of intestinal pathogens and pathobionts. Our data suggest that stunted children have a greater proportion of IgA-recognized fecal bacteria. We moreover identify two putative pathobionts, Haemophilus and Campylobacter, that are broadly targeted by intestinal IgA. This study furthers our understanding of host-microbiota interactions in undernutrition and identifies immune-recognized microbes for future study.