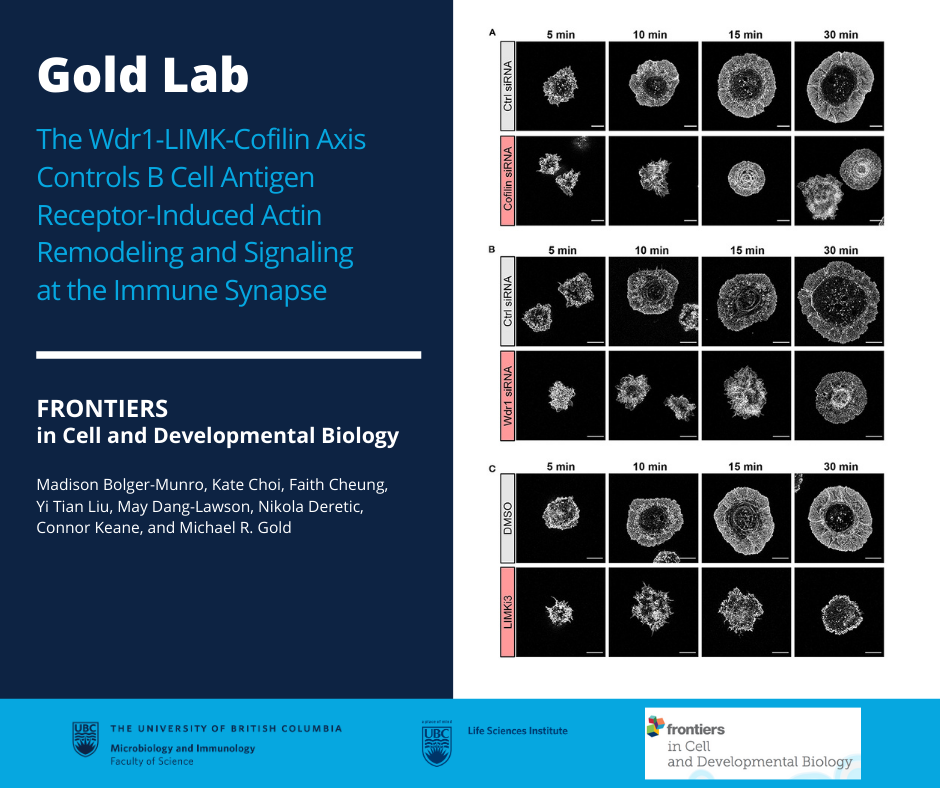 When B cells encounter membrane-bound antigens, the formation and coalescence of B cell antigen receptor (BCR) microclusters amplifies BCR signaling. The ability of B cells to probe the surface of antigen-presenting cells (APCs) and respond to APC-bound antigens requires remodeling of the actin cytoskeleton. Initial BCR signaling stimulates actin-related protein (Arp) 2/3 complex-dependent actin polymerization, which drives B cell spreading as well as the centripetal movement and coalescence of BCR microclusters at the B cell-APC synapse. Sustained actin polymerization depends on concomitant actin filament depolymerization, which enables the recycling of actin monomers and Arp2/3 complexes. Cofilin-mediated severing of actin filaments is a rate-limiting step in the morphological changes that occur during immune synapse formation. Hence, regulators of cofilin activity such as WD repeat-containing protein 1 (Wdr1), LIM domain kinase (LIMK), and coactosin-like 1 (Cotl1) may also be essential for actin-dependent processes in B cells. Wdr1 enhances cofilin-mediated actin disassembly. Conversely, Cotl1 competes with cofilin for binding to actin and LIMK phosphorylates cofilin and prevents it from binding to actin filaments. We now show that Wdr1 and LIMK have distinct roles in BCR-induced assembly of the peripheral actin structures that drive B cell spreading, and that cofilin, Wdr1, and LIMK all contribute to the actin-dependent amplification of BCR signaling at the immune synapse. Depleting Cotl1 had no effect on these processes. Thus, the Wdr1-LIMK-cofilin axis is critical for BCR-induced actin remodeling and for B cell responses to APC-bound antigens.