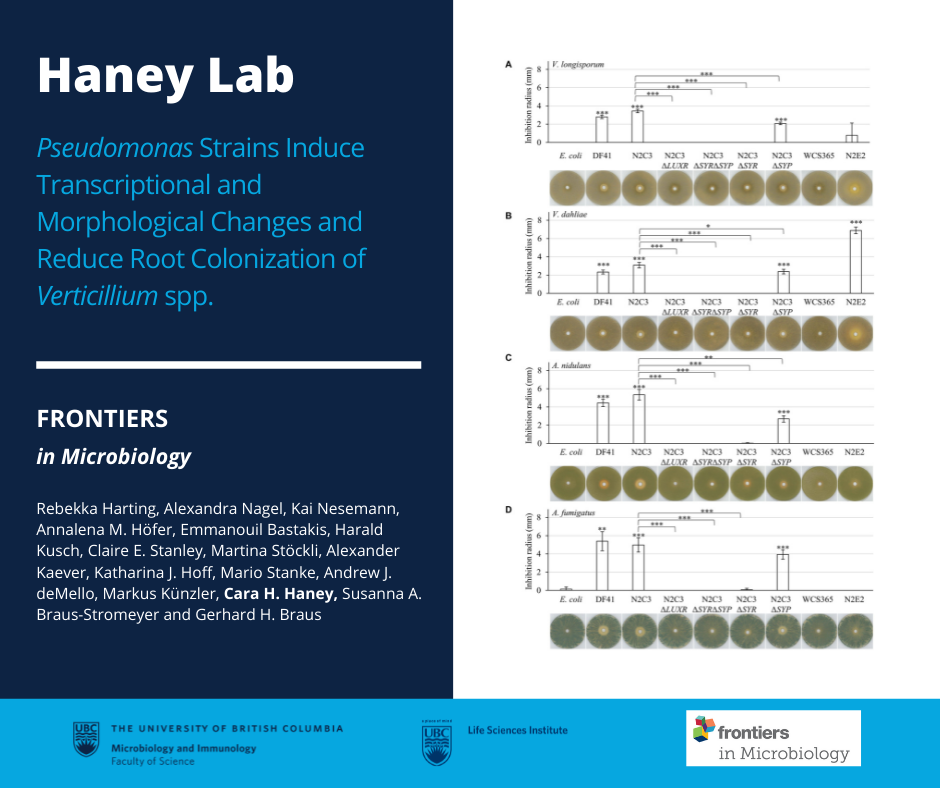 Phytopathogenic Verticillia cause Verticillium wilt on numerous economically important crops. Plant infection begins at the roots, where the fungus is confronted with rhizosphere inhabiting bacteria. The effects of different fluorescent pseudomonads, including some known biocontrol agents of other plant pathogens, on fungal growth of the haploid Verticillium dahliae and/or the amphidiploid Verticillium longisporum were compared on pectin-rich medium, in microfluidic interaction channels, allowing visualization of single hyphae, or on Arabidopsis thaliana roots. We found that the potential for formation of bacterial lipopeptide syringomycin resulted in stronger growth reduction effects on saprophytic Aspergillus nidulans compared to Verticillium spp. A more detailed analyses on bacterial-fungal co-cultivation in narrow interaction channels of microfluidic devices revealed that the strongest inhibitory potential was found for Pseudomonas protegens CHA0, with its inhibitory potential depending on the presence of the GacS/GacA system controlling several bacterial metabolites. Hyphal tip polarity was altered when V. longisporum was confronted with pseudomonads in narrow interaction channels, resulting in a curly morphology instead of straight hyphal tip growth. These results support the hypothesis that the fungus attempts to evade the bacterial confrontation. Alterations due to co-cultivation with bacteria could not only be observed in fungal morphology but also in fungal transcriptome. P. protegensCHA0 alters transcriptional profiles of V. longisporum during 2 h liquid media co-cultivation in pectin-rich medium. Genes required for degradation of and growth on the carbon source pectin were down-regulated, whereas transcripts involved in redox processes were up-regulated. Thus, the secondary metabolite mediated effect of Pseudomonas isolates on Verticillium species results in a complex transcriptional response, leading to decreased growth with precautions for self-protection combined with the initiation of a change in fungal growth direction. This interplay of bacterial effects on the pathogen can be beneficial to protect plants from infection, as shown with A. thaliana root experiments. Treatment of the roots with bacteria prior to infection with V. dahliae resulted in a significant reduction of fungal root colonization. Taken together we demonstrate how pseudomonads interfere with the growth of Verticilliumspp. and show that these bacteria could serve in plant protection.