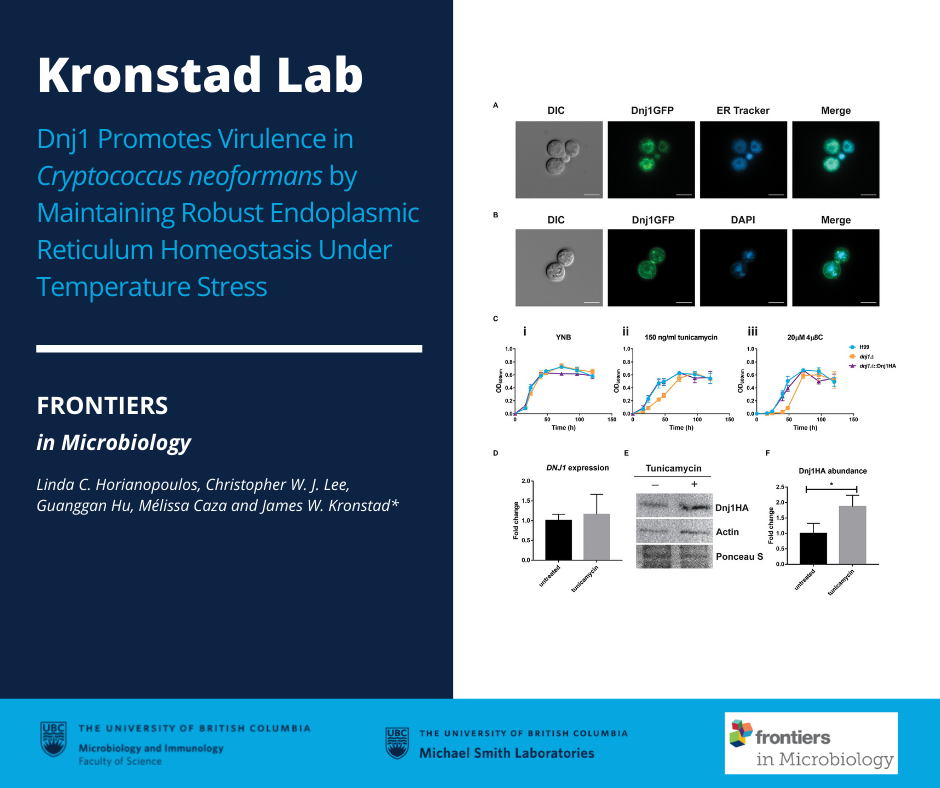 The capacity of opportunistic fungal pathogens such as Cryptococcus neoformans to cause disease is dependent on their ability to overcome an onslaught of stresses including elevated temperature under mammalian host conditions. Protein chaperones and co-chaperones play key roles in thermotolerance. In this study, we characterized the role of the endoplasmic reticulum (ER) J-domain containing co-chaperone, Dnj1, in the virulence of C. neoformans. A strain expressing a Dnj1-GFP fusion protein was used to confirm localization to the ER, and a dnj1∆ deletion mutant was shown to be hypersensitive to the ER stress caused by tunicamycin (TM) or 4μ8C. Dnj1 and another ER chaperone, calnexin were found to coordinately maintain ER homeostasis and contribute to maintenance of cell wall architecture. Dnj1 also contributed to thermotolerance and increased in abundance at elevated temperatures representative of febrile patients (e.g., 39°C) thus highlighting its role as a temperature-responsive J domain protein. The elaboration of virulence factors such as the polysaccharide capsule and extracellular urease activity were also markedly impaired in the dnj1∆ mutant when induced at human body temperature (i.e., 37°C). These virulence factors are immunomodulatory and, indeed, infection with the dnj1∆mutant revealed impaired induction of the cytokines IL-6, IL-10, and MCP-1 in the lungs of mice compared to infection with wild type or complemented strains. The dnj1∆ mutant also had attenuated virulence in an intranasal murine model of cryptococcosis. Altogether, our data indicate that Dnj1 is crucial for survival and virulence factor production at elevated temperatures. The characterization of this co-chaperone also highlights the importance of maintaining homeostasis in the ER for the pathogenesis of C. neoformans.