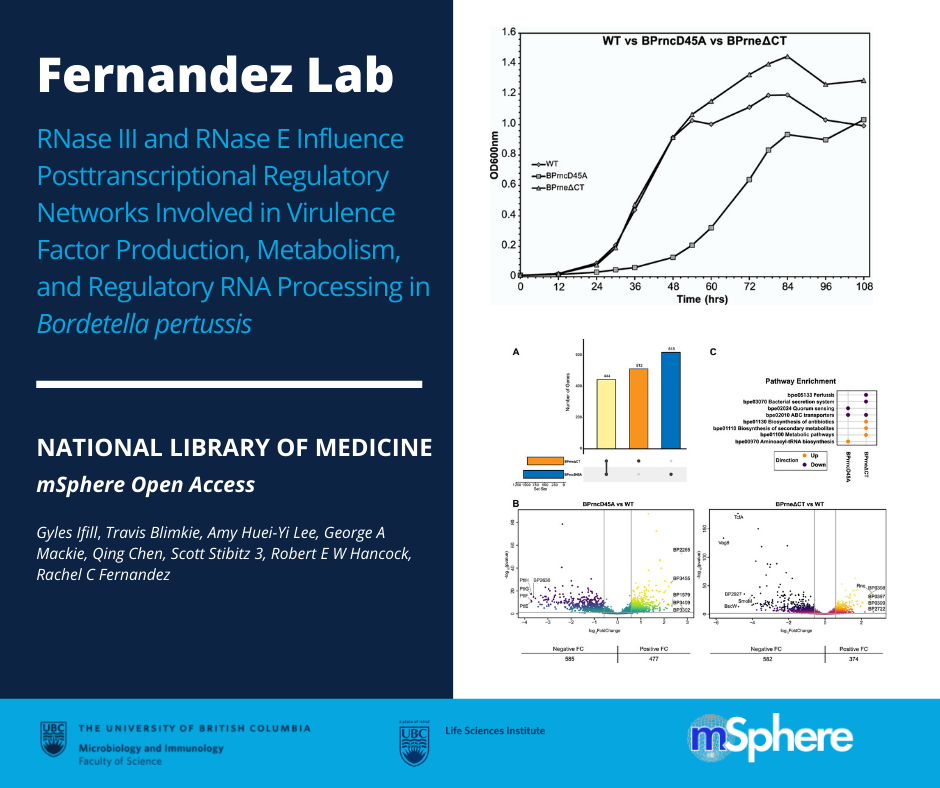 Bordetella pertussis has been shown to encode regulatory RNAs, yet the posttranscriptional regulatory circuits on which they act remain to be fully elucidated. We generated mutants lacking the endonucleases RNase III and RNase E and assessed their individual impact on the B. pertussis transcriptome. Transcriptome sequencing (RNA-Seq) analysis showed differential expression of ∼25% of the B. pertussis transcriptome in each mutant, with only 28% overlap between data sets. Both endonucleases exhibited substantial impact on genes involved in amino acid uptake (e.g., ABC transporters) and in virulence (e.g., the type III secretion system and the autotransporters vag8, tcfA, and brkA). Interestingly, mutations in RNase III and RNase E drove the stability of many transcripts, including those involved in virulence, in opposite directions, a result that was validated by qPCR and immunoblotting for tcfA and brkA. Of note, whereas similar mutations to RNase E in Escherichia coli have subtle effects on transcript stability, a striking >20-fold reduction in four gene transcripts, including tcfA and vag8, was observed in B. pertussis. We further compared our data set to the regulon controlled by the RNA chaperone Hfq to identify B. pertussis loci influenced by regulatory RNAs. This analysis identified ∼120 genes and 19 operons potentially regulated at the posttranscriptional level. Thus, our findings revealed how changes in RNase III- and RNase E-mediated RNA turnover influence pathways associated with virulence and cellular homeostasis. Moreover, we highlighted loci potentially influenced by regulatory RNAs, providing insights into the posttranscriptional regulatory networks involved in fine-tuning B. pertussis gene expression.

IMPORTANCE Noncoding, regulatory RNAs in bacterial pathogens are critical components required for rapid changes in gene expression profiles. However, little is known about the role of regulatory RNAs in the growth and pathogenesis of Bordetella pertussis. To address this, mutants separately lacking ribonucleases central to regulatory RNA processing, RNase III and RNase E, were analyzed by RNA-Seq. Here, we detail the first transcriptomic analysis of the impact of altered RNA degradation in B. pertussis. Each mutant showed approximately 1,000 differentially expressed genes, with significant changes in the expression of pathways associated with metabolism, bacterial secretion, and virulence factor production. Our analysis suggests an important role for these ribonucleases during host colonization and provides insights into the breadth of posttranscriptional regulation in B. pertussis, further informing our understanding of B. pertussis pathogenesis.