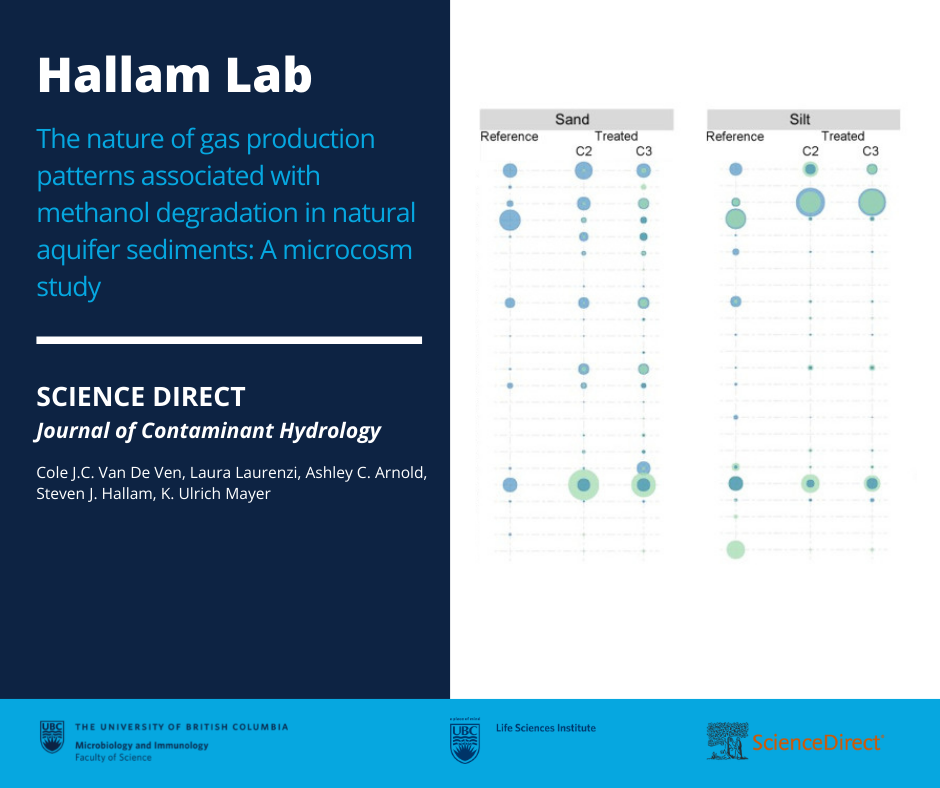 With growing global use of methanol as a fuel additive and extensive use in other industrial processes, there is the potential for unintended release and spills into soils and aquifers. In these subsurface systems it is likely that methanol will be readily biodegraded; however, degradation may lead to the production of by-products, most importantly methane possibly resulting in explosion hazards and volatile fatty acids (VFAs) causing aesthetic issues for groundwater. In this study, the formation of these potentially harmful by-products due to methanol biodegradation was investigated in natural sand and silt sediments using microcosms inoculated with neat methanol (100%) ranging in concentration from 100 to 100,000 ppm. To assess the rate of degradation and by-product formation, water and headspace samples were collected and analyzed for methanol, volatile fatty acids (VFAs, including acetic, butyric, and propionic acid), cation (metal) concentrations (Al, Ca, Fe, K, Mg, Mn and Na), microbial community structure and activity, headspace pressure, gas composition (CH4, CO2, O2 and N2), and compound specific isotopes. Methanol was completely biodegraded in sand and silt up to concentrations of 1000 ppm and 10,000 ppm, respectively. Degradation was initially aerobic, consuming oxygen (O2) and producing carbon dioxide (CO2). When O2 was depleted, the microcosms became anaerobic and a lag in methanol degradation occurred (ranging from 41 to 87 days). Following this lag, methanol was preferentially degraded to acetate, coupled with CO2 reduction. Microcosms with high methanol concentrations (10,000 ppm) were driven further down the redox ladder and exhibited fermentation, leading to concurrent acetate and methane (CH4) generation. In all cases acetate was an intermediate product, further degraded to the final products of CH4 and CO2. Carbonates present in the microcosm sediments helped buffer VFA acidification and replenished CO2. Methane generation in the anaerobic microcosms was short-lived, but temporarily reached high rates up to 13 mg kg−1 day−1. Under the conditions of these experiments, methanol degradation occurred rapidly, after initial lag periods, which were a function of methanol concentration and sediment type. Our experiment also showed that methanol degradation and associated methane production can occur in a stepwise fashion.