Meet Connor Keane – a third-year undergraduate student in the Department of Microbiology and Immunology. From South Surrey, BC, Keane comes from a mixed background of Irish and Mi’kmaq First Nations, in which he confidently connects to his roots. 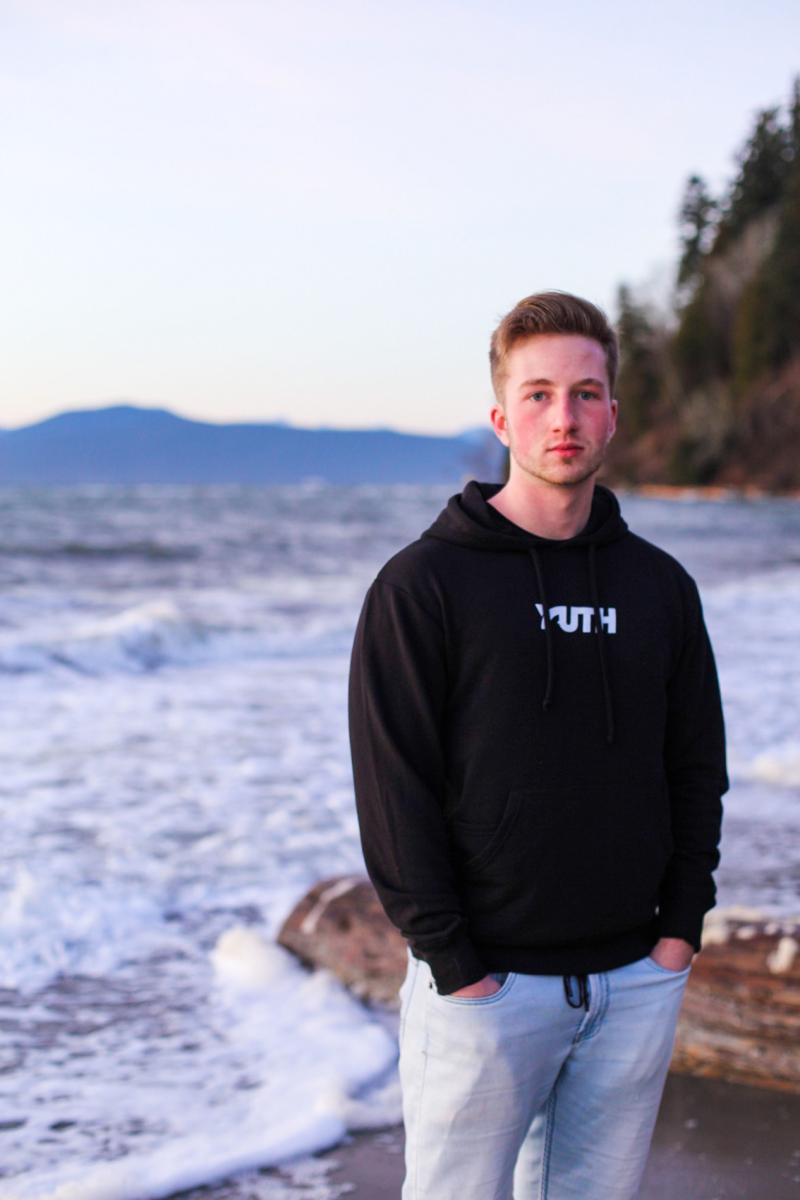 Whether it’s conducting research in the Gold Lab, winning a Canadian Service Corps Grant for a nonprofit organization he co-founded with a friend, or hosting a workshop with Indigenous Astronaut Dr. John Herrington – Keane has made the best of his time at UBC by pursuing his passions in every way he can.

Recently, Keane has been elected co-president of the UBC Chapter of the Canadian Indigenous Science and Engineering Society and is also looking to present his research at the National Canadian Indigenous Science and Engineering Conference in the spring – just some of the many opportunities that are possible all while pursuing a degree in Microbiology and Immunology.

What kinds of research projects are you working on in the Gold Lab?

Keane: I was awarded an NSERC (Natural Sciences and Engineering Research Council of Canada) undergraduate student research award that allowed me to work in the lab full time over the summer. My current project is to determine the role of two specific proteins (CLIP-170 and IQGAP1) in B cell receptor signaling, antigen cluster formation, and B cell spreading. So, I’ve just been working a lot on that. I would say I’ve made significant progress on understanding the first protein and will be continuing work on the project next semester for my MICB 448 - directed studies.

How would you describe your research to someone who does not have a background in science?

Keane: I would first give a brief introduction explaining what B cells are and how they function. So, I would describe ways in which the human body fights off pathogens and specifically how this is carried out through the production of antibodies.  Antibodies are proteins that can bind to invading pathogens to eliminate them. The B cells in your body can be activated to produce these antibodies and the process is classified as an immune response. If you learn about the B cell and understand how it functions, that could potentially allow you to boost or suppress immune responses. Relating this to my project, I'm trying to determine the role of two different proteins in B cells’ ability to be activated to produce antibodies. From a human health perspective, one example of the application of my research is in the case of autoimmune disease where an individual’s antibodies are attacking their own tissue, which is undesirable. Understanding the way B cells are activated to produce these antibodies and the proteins involved is essential in the development of treatments to limit the antibody production if it was life threatening.

What’s the end goal of your research?

Keane: Right now, I’m in a Work Learn position at the Gold Lab where I have taken on more lab maintenance related activities such as making buffers, sterilizing solutions and waste, and refilling supplies like ethanol and liquid nitrogen. The rest of the time I spend continuing to work on my project. So that’s running a variety of experiments, collecting and analyzing the data, and presenting the results in lab meeting for helpful feedback. My end goal for my current research would be to complete my project and use the data to write and publish a paper. 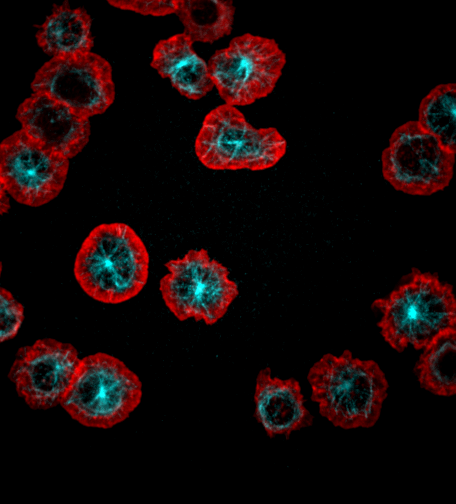 (A20 Vector B Cell Spreading Assay)

What was your experience like with CEDAR Science Camp?

Keane: I started volunteering at CEDAR Summer Camp after my first year at UBC and it has been a blast every year. It is a two-week camp that is held out of the First Nations Longhouse at UBC presenting the opportunity for Indigenous youth to learn about science, play sports, and spend time with friends. During the camp, we help run a variety of science-focussed workshops for about 30 to 40 Indigenous youth at the camp.

Thanks to the support from various departments on campus, the youth taking part in the camp have a chance to experience activities from all areas of science. For example, last summer we were able to go to the pharmacy building to take part in a workshop where the campers could make their own hand cream from scratch using pharmaceutical lab equipment.  I never had the chance to participate in a science-based summer camp when I was younger, but I definitely would have liked to after working at CEDAR. It’s a fun experience and it is great to see the built-up energy of the campers over summer.

How would you describe your experiences as a member of the UBC Canadian Indigenous Science and Engineering Society (.caISES)?

Keane: Our chapter of the Canadian Indigenous Science and Engineering Society has grown substantially over the past year and my involvement has presented me opportunities to build connections with professionals and to give back to the community. Last spring, we were able to host Indigenous NASA astronaut Dr. John Herrington at UBC in an inspiring community event at the UBC First Nations Longhouse. With assistance from fellow members in the UBC Chapter of the Canadian Indigenous Science and Engineering Society, I had led a workshop presenting the opportunity for Indigenous youth to engage in. The workshop session was based on the oxygen tank explosion during the Apollo 13 space mission and a question and answer period with Dr. Herrington.  We were able to provide all the resources that the astronauts had to their disposal to solve the pressing issue of losing oxygen and time to work together to reason their way to a solution.  The event concluded with a formal lunch and presentation from Dr. John Herrington with the students as well as faculty from various departments. 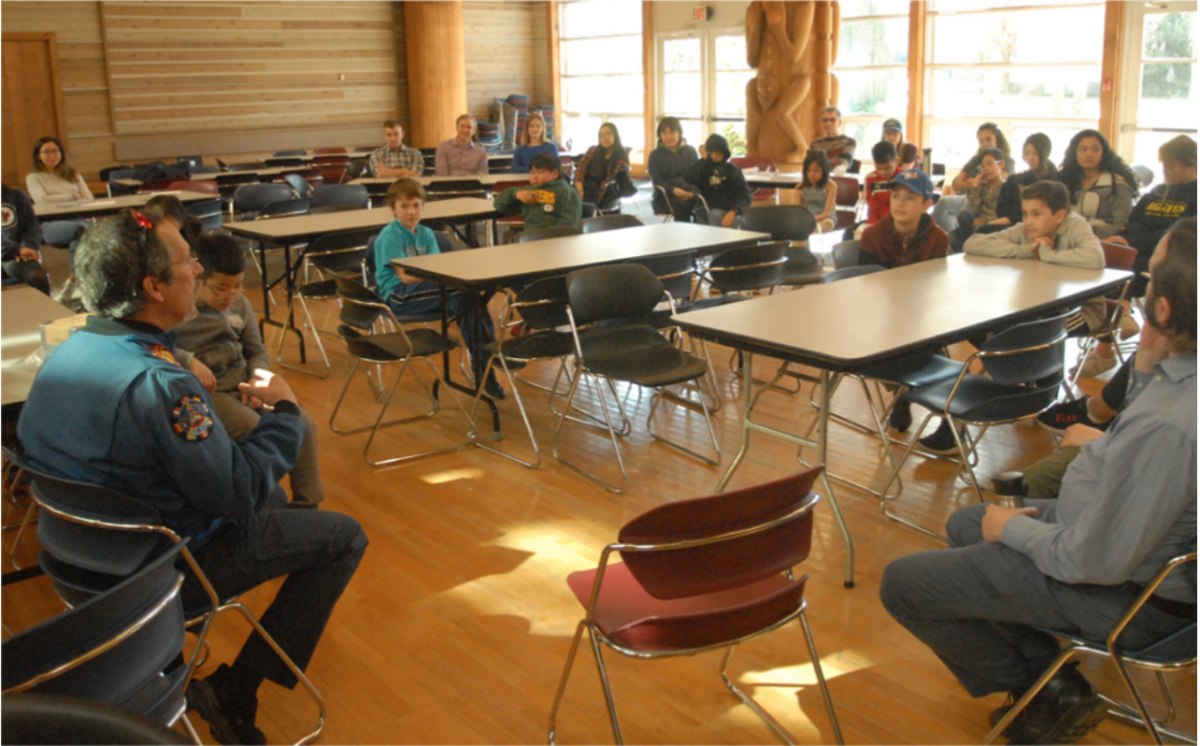 Connor and Joel Liman, another member of UBC .caISES, wrote an article summarizing the event and the UBC chapter that was published in the fall edition of Winds of Change, a nationally distributed magazine produced by the American Indian Science and Engineering Society.

You can check out their writeup here: Dr. John Herrington speaks at the UBC First Nations Longhouse

Other than your research and desire to work with people, what else are you passionate about?

Keane: I have always had a passion for music as well as fitness throughout my life and I am lucky to be able to continue pursuing these passions while at UBC.

My friend Bachviet Nguyen, who is also a third-year student in MBIM, and I founded a non-profit organization called Music is Timeless that seeks to promote music education among the senior citizens in our community by offering free music lessons. Our team has taught around 400 music lessons to date and are working to provide the service to as many retirement communities as possible.

Our goal is to enable senior citizens to fully enjoy all of the mental, cognitive and social benefits of learning a musical instrument. According to scientific research, it has been found that taking music lessons resulted in decreased depression, positive mood states and improved psychological and physical quality of life in elderly individuals. As a result, we hope to raise public awareness about the health benefits of engaging in music as a hobby during the later stages of one’s life.