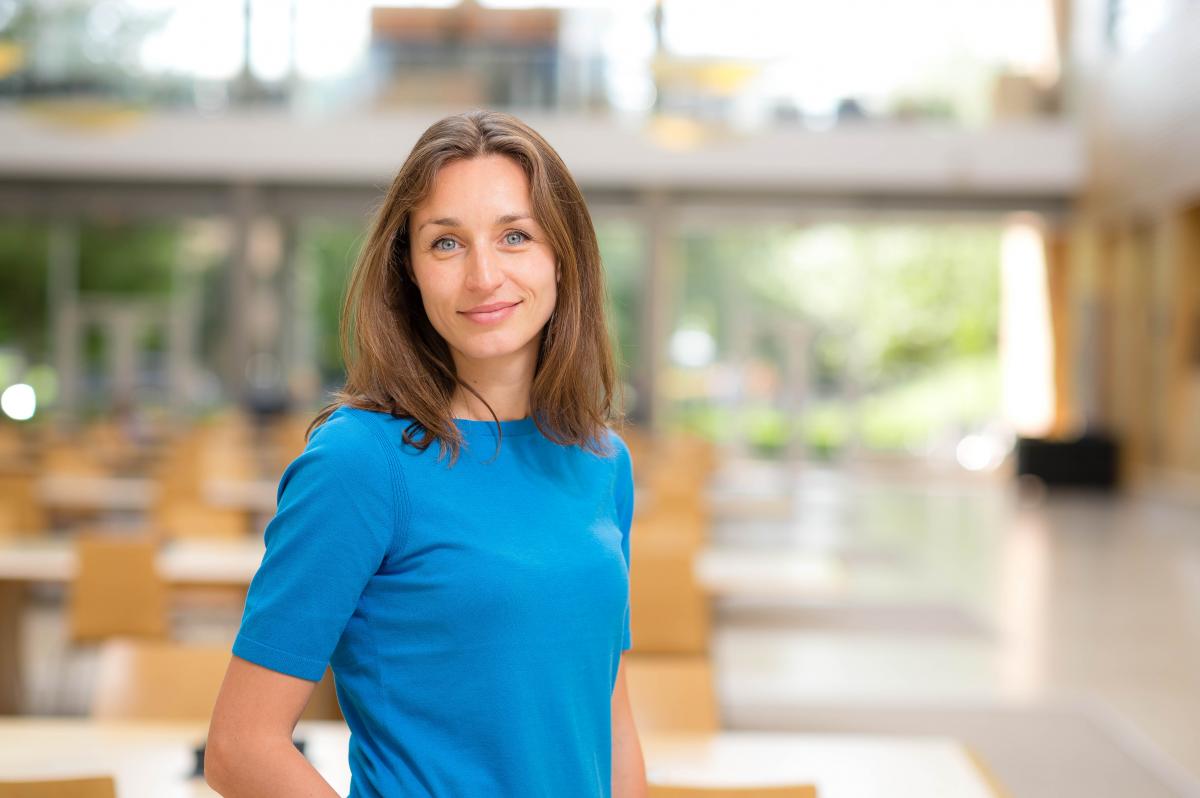 UBC’s Dr. Carolina Tropini, an Assistant Professor in the Department of Microbiology and Immunology and the School of Biomedical Engineering, has been named a Distinguished Investigator by the Paul G. Allen Frontiers Group.

The award will provide four groups of researchers with US$1.5M in funding over a three-year period to pursue projects in health, disease and technology centred on the emerging field of immunometabolism.

As one of 10 new Allen Distinguished Investigators, who will be working together in teams of two or three, Dr. Tropini will explore how immune responses, metabolism, gut microbiomes and environments may contribute to widely varied symptoms and responses to treatment among people with inflammatory bowel disease (IBD).

“I am incredibly honoured to receive this recognition,” says Dr. Tropini, the only Canadian researcher to receive Frontiers Group funding in this round.

“IBD affects 10 million people world-wide. It is a chronic illness, and has no cure. “Unfortunately,” she adds, “we do not understand the variability we see in this disease: both the symptoms and response to treatments can vary incredibly, not only between patients, but even at the level of the single patient.”

Tropini shares that today’s award would not have been possible without the incredible mentorship and support she has received from the lead Principal Investigator of her group, Dr. Aida Habtezion (Stanford University School of Medicine), who was invited to submit a proposal for the Allen Distinguished Investigator call last year.

“I’m extremely excited about the proposal we submitted,” adds Dr. Tropini, whose own work focuses on determining how the physical environment in the gut affects the microbes that live within it, and how those, in turn, affect our health. “Our lab is very interested in studying IBD, as inflammation creates a highly modified local environment: we need multi-disciplinary approaches to tackle this complex and debilitating disease.”

With funding from Crohn’s and Colitis Canada, Tropini and her team are investigating how microbes control the gut environment in laboratory models. She is also collaborating with a group of Canadian researchers on a CIHR team grant to understand how disease-causing bacteria can affect IBD in children. “In this Allen Distinguished Investigators project,” says Dr. Tropini, “we will be working with adult IBD patients, measuring and integrating the response from the host immune system with responses from the gut microbiota, at a fine spatial level.”

Tight links between human health, immunity and how our bodies process what we eat – the intersection of immunology and the metabolism – remains a poorly understood domain in human biology. The topic of metabolism and its intersection with the immune system kept coming up in meetings between Frontiers Group staff and scientific experts aimed at identifying future areas of interest, says Frontiers Group Director Kathy Richmond, Ph.D., M.B.A. As they delved into the unknowns, Richmond and her team realized that any significant progress in these areas could improve human health.

“In so many diseases, a tipping point is reached where entire systems in our bodies are thrown off balance. Studying the complex and fascinating interactions between the immune system and energy metabolism will give us a better understanding of what it means to be healthy and how it might be possible to return those systems to balance after damage or disease,” Richmond said. “The innovative and pioneering visions of these four teams of Allen Distinguished Investigators span a variety of approaches to tackle this exciting area of biomedical research.”

The Frontiers Group will award a total of $6 million awarded for immunometabolism research. Founded by the late philanthropist Paul G. Allen in 2016, the group recommends funding from the Paul G. Allen Family Foundation to researchers around the world whose work has the potential to accelerate scientific discoveries or launch entirely new avenues of exploration.

The Tropini/Habtezion/Garud collaboration is one of four new ADI projects, which include research on human disease, basic biology of the mammalian immune system, and technology development that could impact many areas of immunology and metabolism research.

All of us are made up of trillions of cells, yet it is unclear how these cells simultaneously behave as individuals and as part of a collective that makes up who we are. Drs. Will Bailis, Chris Bennett and Ruaidhrí Jackson are leading a project to better understand the many links between immunity and metabolism at the scale of individual cells, organs and the entire body. These inextricable links — how our diet affects our immune system, and how our immune cells in turn change metabolism — tie into all aspects of human health and disease, including cancer, diabetes and heart disease. Using laboratory mice, the researchers will study how an animal’s food affects energy production inside immune cells by genetically engineering those cells to “ignore” changes in diet. In tandem, they will study how one particular type of immune cell, known as tissue resident macrophages, uses metabolism to govern not only its own cellular function, but the function of tissues and the entire body.

Inflammatory bowel disease, or IBD, is a class of immune diseases that stem from chronic inflammation in the intestines. Patients with IBD have widely varied symptoms and responses to treatment which can’t be fully explained by human genetics. Drs. Aida Habtezion, Nandita Garud and Carolina Tropini are leading a project to explore how patients’ immune responses, metabolism, gut microbiomes and environments may contribute to that variability, using a registry of hundreds of IBD patient volunteers. Better understanding the details of variation between patients, and the reasons behind that diversity, could lead to better, more tailored treatments for this class of often crippling illnesses.

Like all cells, our immune cells need energy from the food we eat to do their jobs. Drs. Russell Jones and Yasmine Belkaid have recently found that T cells, an important type of immune cell that surveys the body and detects and eliminates infected cells, use multiple kinds of fuel when they are working their hardest. Now, they are leading a project to better understand T cells’ preferred fuel sources, uncovering which types of T-cell metabolism are needed for optimal infection-fighting and which types might lead to immune dysfunction.

To better understand the immune system and how it dovetails with metabolism, researchers need better toolkits to track and manipulate multiple kinds of cells and molecules at once, over time, in a living animal. Drs. Jennifer Prescher and Michelle Digman are leading the development of a new technique to shine “biological flashlights” on many different immune- and metabolism-related molecules at the same time. The technique, which they dub bioluminescent phasor, will ultimately yield a large toolkit of optical tags that can light up multiple processes or proteins in the laboratory mouse’s immune system at once. Once complete, the toolkit would be available for any research lab to use, opening new avenues for discoveries about the immune system and its relationship to our diet.

About the Paul G. Allen Family Foundation
For more than four decades the Paul G. Allen Family Foundation has focused on changing the trajectory of some of the world’s toughest problems. Founded by philanthropists Jody Allen and the late Paul G. Allen, cofounder of Microsoft, the Foundation initially invested in community needs across the Pacific Northwest with a focus on regional arts, under-served populations, and the environment. Today, the Foundation supports a global portfolio of frontline partners working to preserve ocean health, protect wildlife, combat climate change, and strengthen communities. The Foundation invests in grantees to leverage technology, fill data and science gaps, and drive positive public policy to advance knowledge and enable lasting change.