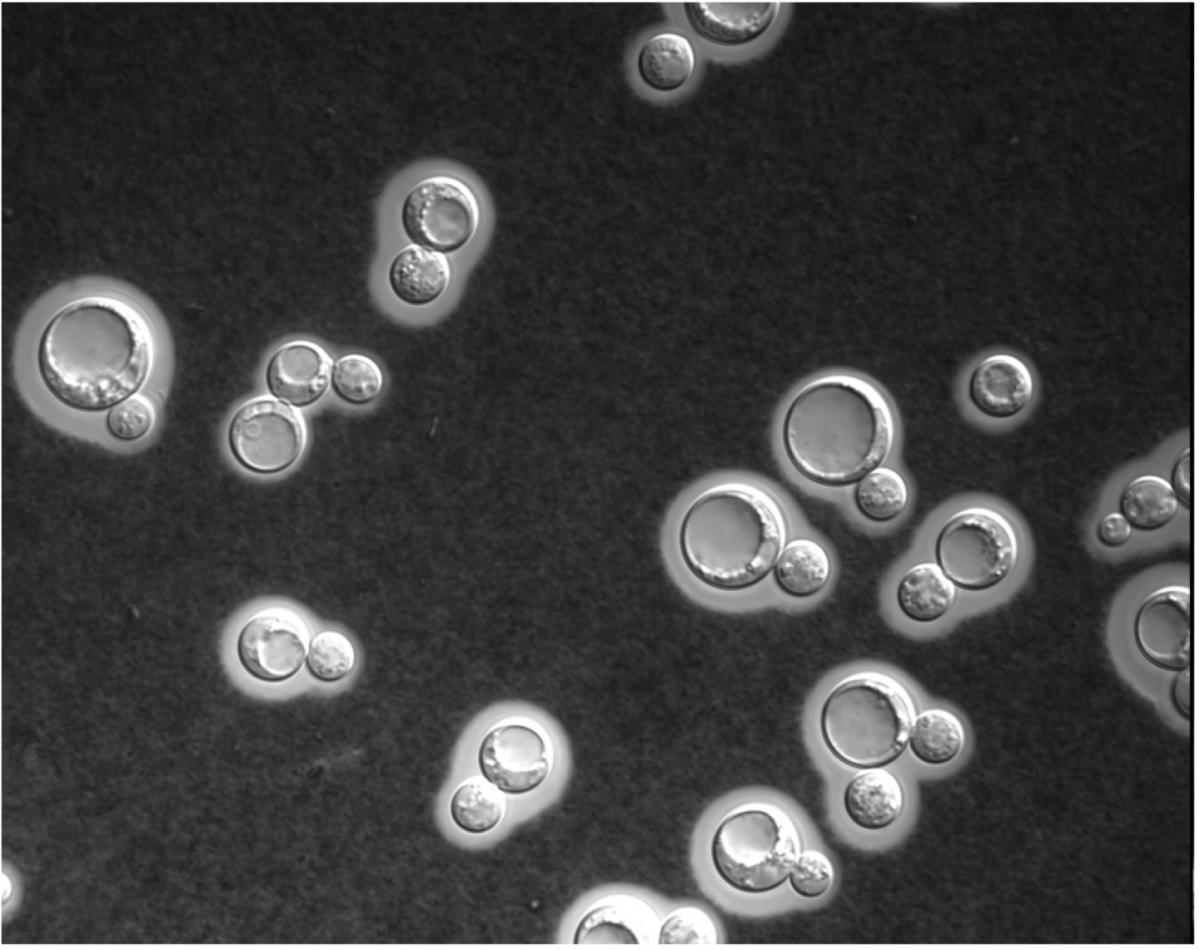 “At any given time, it’s estimated that a quarter of the world’s population has a fungal infection.”

“The other thing I think is important to know is that we’re really limited on what antifungals are available to us and the development of new antifungals is extremely slow,” says Linda.

Since there tends to be fewer fungal pathogens on the human body or in the gut than bacteria, there is an underappreciation of just how colonized we are with fungi. But if you consider the volume or mass, fungi are generally much larger than bacteria and therefore can be a really important component of the microbiome.

“There are certainly clear examples out there of fungi having a major impact on human health beyond just causing infectious diseases,” shares Jim Kronstad, a professor and PI in the University of British Columbia’s Department of Microbiology and Immunology, and the Michael Smith Laboratories. “I think we just need to tell those stories in more detail and keep them at the forefront to let people know what’s going on.”

Striking examples include recent studies that show how fungi are colonizing our skin, particularly species of Malassezia, and can have an impact on diseases like inflammatory bowel disease and pancreatic cancer; and the fungal pathogen Cryptococcus neoformans, the causative agent of cryptococcal meningitis, which is responsible for 15% of all HIV-related deaths.

Approaches to research on Cryptococcus neoformans 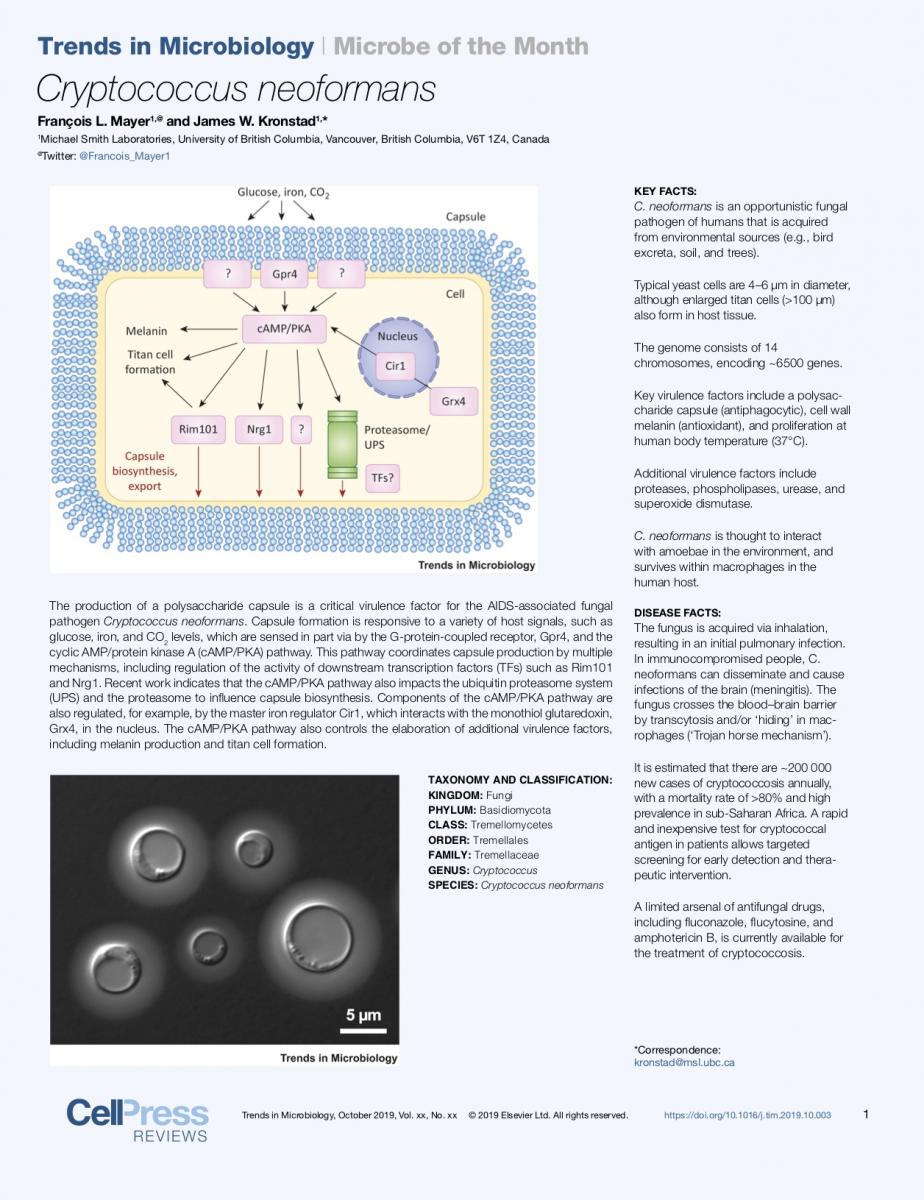 Cryptococcus neoformans is one of two fungal pathogens under investigation in the Kronstad lab. The other is a plant pathogen Ustilago maydis that infects maize and is an excellent model system for studying the biotrophic growth of fungi in plant tissue. A major theme for these fungi is the investigation of the adaptation of the fungi to host tissue through nutritional and temperature habituation.

With regard to Nutritional adaptation, the lab focuses on iron as a key nutrient that pathogens sense when they’re in mammalian hosts. For Cryptococcus, iron sensing actually triggers formation of a major virulence factor, the polysaccharide capsule that protects the fungus from the host immune system. The projects on iron and capsule are funded by the National Institutes of Health in the US and the Canadian Institutes of Health Research, and focus on the underlying regulation of capsule formation.

Linda Horianopoulos, on the other hand, looks specifically at temperature adaptation. Since C. neoformans can be found in the environment (soil, bird excreta, and trees) and is acquired through the air we breathe, she looks at a group of proteins that help fungi adapt to temperature stress.

“When C. neoformans cells are inhaled by a human, the fungus is immediately exposed to human body temperature,” she shares. “So, I study a group of proteins that help the fungus adapt to and survive at that higher temperature.”

“An interesting study in New York City a long time ago showed that most people by the age of five-years-old have been exposed to and have antibodies against Cryptococcus neoformans,” says Kronstad.

Most people who are exposed to the fungus will be totally fine. But immunocompromised people aren’t often as lucky. This is why researchers focus on C. neoformans as an AIDS-associated disease.

“There's this theory that we all are carrying around Cryptococcal cells and probably other fungi and microbes in our lungs, and that our immune system is containing these infections. But if someone gets AIDS and has a compromised immune system, then it is possible to have reactivation of a latent infection.”

Latent infection, and new exposure from inhalation of environmental C. neoformans are just some factors as to why people come down with disease. But a big challenge faced when identifying drugs against fungi is that fungal cells are very similar to human cells in terms of their biochemistry, and the kinds of molecules that are important for proliferation of the pathogen. Therefore, Kronstad shares that any target in the fungus must not also be present in humans, so the drugs themselves are specific. Because of this limitation, the genetic work in the Kronstad lab focuses on genes, proteins, and processes that are different in fungi compared to humans.

In a clear example of this approach, Linda says they found and characterized a protein that was quite different between humans and Cryptococcus. The analysis of this protein was presented in her recently published paper in mBio (The Novel J-Domain Protein Mrj1 Is Required for Mitochondrial Respiration and Virulence in Cryptococcus neoformans).

[FIG 11 in mBio paper]. Model for the role of Mrj1 in mitochondrial function and virulence factor deployment. A cryptococcal cell is shown elaborating the polysaccharide capsule. The inset shows that in the mrj1 knockout and J-domain-inactivated mutants, mitochondrial respiration is compromised. Specifically, we propose that the co-chaperone Mrj1 is required for electron flow through complexes III and IV, the proton motive force generated at these complexes, and the reduction of oxygen at complex IV. Rather, the alternative oxidase (AOX) is the site of oxygen reduction and termination of the electron transport chain (ETC). Furthermore, the mitochondrial defects in mrj1 mutants are deemed to be responsible for the observed defect in cell wall architecture, increase in capsule shedding, and ultimately the reduced virulence of these mutants.

“When you delete this gene, you find that the fungus doesn’t cause infection anymore in a mouse model of cryptococcosis,” says Linda. “And what happens is that the fungal cells aren't able to grow properly because their mitochondria are dysfunctional. But since there are differences like this in the mitochondria between humans and fungi, we propose that the protein would be a promising target for drug development. It’s also important to remember this is just the first step. Even though you find this exciting potential target, there are still many steps away from getting a drug. It's a long process.”

Even for fungi, it’s a long process to a vaccine

To circumvent the long process of drug development, a big part of drug discovery for researchers is trying to repurpose already existing drugs.

Kronstad says they spend a lot of time looking at drugs that are already FDA-approved, but also have an impact on the fungus, and doing mouse model tests to see whether there is some value in pursuing those as candidate antifungals.

One of the areas they’ve been investigating is the antifungal properties of certain anti-cancer drugs to turn the tables and exploit similarities between human and fungal cells. But this approach can be tricky since the patients have HIV/AIDS and are immunocompromised. Researchers have to be very careful with doses and the use of combinations with other drugs because Cryptococcus infections are often complicated by underlying patient illness.

Currently, there are some promising new antifungal drugs in clinical trials. Although none have made it to the clinic yet, Linda shares that there should be a market for these drugs given their potential impact on overall quality of life.

“I went to a really good talk in 2019 about a fungal vaccine against Candida albicans (https://pubmed.ncbi.nlm.nih.gov/29697768/), one of the most common fungal pathogens,” she shares. “It's a fungal pathogen responsible for catheter infections and can cause sepsis. But most commonly, people know it because it causes yeast infections. I thought it was a really, really interesting talk because the vaccine they were trying to develop was effective in making it much longer between yeast infections for women who suffer from recurrent yeast infections.”

This vaccine was just in clinical trials so far, but Linda says she believes it could really improve people’s quality of life even if it doesn’t solve the problem completely. Even if it just makes it so you get them one third as frequently, there’s no question that it should be pushed forward.

When it comes to research on the fungal pathogen C. neoformans, even with the ongoing pandemic of virus SARS-CoV-2, both Linda Horianopoulos and James Kronstad feel lucky to be in a supportive work environment because of the way UBC and the departments have handled the road back to research. As microbiologists, they already know how easy it is to get contamination if you’re not careful. So, it’s always embedded in their approach to laboratory work to be aware of the importance of cleaning things properly and following strict protocols.

“I hope there's a change in behaviour among the public as a result of the increased awareness of microbes,” says Kronstad of the current state of the world. “More awareness of what it really means to have a microbial pathogen around, and the value of biomedical research.”